Would $1000 per month extra income make a difference in your financial well-being? These 11 people have a side gig that adds to their salary or self-employment income. Each of them earns an extra $1000+ per month from their side gig.

David Filipi’s main income comes from his custom mix cereal business, but because he and his partner and co-owner, Klara, need extra cash, David also has a side gig of doing real estate photography. David is enthusiastic about his side gig. He comments, “When you build some network, you do not have spend for advertising and all you need is the camera and some skill. I have no boss, I do what I love, and the hourly rate is reasonable.”

Daniel Packer works full-time in online advertising. For a fun side gig, he started a blog, SweatingTheBigStuff.com about personal finance. For 6-8 months he wrote content without having any plan to earn income from his hobby. Then someone offered him $50 to run the first ad on the site. Daniel recalls, “Until that point, I had no idea that you could even earn anything blogging, so it was a very welcome payment, and things have taken off from there. In 18 months my earnings hit the $1000/month mark, and earnings have stayed there for over four years.”

Daniel spends about 3-4 hours a week on the actual blog, but he also spends 2-3 hours per week networking with people on Twitter and commenting on other blogs. Daniel adds, “One of the great things that has developed from this is that now that I am confident in creating websites, I like to build other sites for fun and profit. My most recent one is SeriousBabies.com, pictures of babies doing serious things. This one doesn’t currently earn any income (and likely won’t), but people seem to love the idea and if it makes people smile, I’ll take it!”

Lue Nuwame has a full-time job is as a conveyor operator assistant at a major retailer’s distribution warehouse. As a side gig, he runs a YouTube channel, The Homemade Game Guru, that generates a second income ranging from $500 to $1200 per month. Income is generated through Google ad revenue and via licensing (one of his videos is used in a California anti-smoking television commercial).

Affectionately named by his viewers, “The Madman of Cardboard,” because he makes crafts and inventions out of cardboard, Lue runs his YouTube channel out of his basement and living room. His channel started as a hobby in 2008 and he has created everything from a outdoor cardboard swimming pool (that held water) to a cardboard Christmas tree. The side gig has been good for Lue not just for money, but personally as well. On one of the videos on his channel, Lue credits the imagination and creativity it takes to make games with helping him to overcome a severe bout of depression.

4. Teaching English As A Second Language

Vannessa Wade is the founder and CEO of Connect the Dots PR, but she also bring in extra funds by teaching English to non-native speakers. Vannessa teaches English by using music, watching movies and talking about events. Vannessa started out as a volunteer when someone asked her to help with a class. It was planned to be very short-term but it soon expanded so that Vannessa was working for several different programs.

Vannessa reports, “The teaching led to private tutoring opportunities, too. I never had to actively seek clients because they literally came to me. I enjoy that there is money to be made, I can create my own hours, and I am helping other to achieve the skills they need to be successful citizens.”

Lily Starling is a massage therapist in Davis, California. She is also a marketing and business coach for holistic service providers. In addition to running her two businesses, Lily has a side gig earning money in a way she never imagined she would:  helping businesses by building sales pages, landing pages, and other fancy web design to support big online launches. She says, “If you had told me three years ago that I would be running a side gig like this, I would have laughed and told you that I didn’t know the first thing about coding or websites.”

Flash forward three years and Lily has taken on some big web design projects. She says she still doesn’t know much code but that knowing code isn’t required. She explains, “Technology has advanced so much in the past three years, just about anyone can take on a support role helping other business owners outsource the work they don’t need to and shouldn’t focus on. I take my existing skills around marketing and apply them to someone else’s business and along the way I’ve developed a good dash of technical know-how.”

This month, Lily’s side gig income was $1250. She advises, “Basically, your skills can always be applied to a support gig for someone else. Look for a business owner that is overwhelmed and figure out how you can step in to take projects off their plate.”

Sarah Rickerd is Director of Marketing for funeral industry consulting firm Frazer Consultants. Her side gig is ghost writing blog posts and other content for small business owners. Sarah likes the synergy between her company, Arbor Business Writing, and her day job because she says her ghostwriting helps her to stay on top of business and marketing trends. Sarah started her freelance writing gig in 2007 when she was building and selling websites. One of her clients liked her writing style and he hired her to write for multiple websites. From there, her business grew via word-of-mouth referral to a core group of 2-3 business owners that she works for today.

Sarah recommends three resources for prospective or current freelance bloggers who want to grow their business:

Amie and Jason Mount live in Aberdeen, South Dakota. Jason’s main job is finishing concrete floors and he has done that for 14 years. Amie works in customer service. On the weekends, Amie does professional face painting and Jason does balloon twisting and decor. 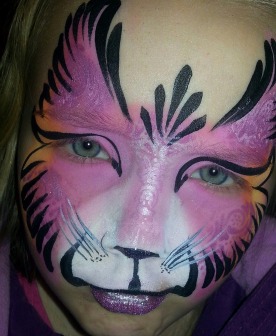 Amie recalls, “The very first job we did was volunteering at the local Boys and Girls Club of Aberdeen. We went in and did 208 balloons for 208 kids at no cost to get our name out there. Soon after that we were hired from a parent who saw a flyer we had posted in town for a birthday party. We did a lot of free advertising at first such as flyers and Facebook posts. As soon as we got enough response, we made a business Facebook page and got some business cards. Our first year was spent doing a lot of vendor type events on a pay per face or pay per balloon basis and we handed out hundreds and hundreds of business cards.”

Amie and Jason are now a year and a half into our side business and are hired and paid on an hourly basis for all kinds of events in South Dakota, Minnesota and North Dakota.

Amie concludes, “We love our side job it has been a great extra source of income, and even better than that, we create smiles everywhere we go.”

Brian Winch was a full-time shipper and receiver for a large sporting goods retailer. The job wasn’t providing enough income, so Brian started a side gig after hours doing parking lot clean up. Soon he was making more money from his side gig than from his full-time job. Via an operations manual that he sells online at CleanLots.com, Brian now teaches other people how to launch and run their own service business doing parking lot clean up.

Brian emphasizes that there is little risk because this business does not require specialized education or expensive equipment and it can be done in combination with a day job. Especially for people who hate the idea of spending more time in an office inside, this business idea is excellent.

Nick Whitmore is CEO of an ecommerce company. When it was in the startup phase, it didn’t pay enough for Nick to survive. He remembers, “I had to find a side gig or lose my home and go hungry, so I started doing freelance writing via Elance. After 18 months of doing freelance writing, I realized that I could turn writing into a business, too, so I started a writing content writing business that now earns over $1000/month.

To launch his own writing business, he says he took the confidence he gained from working at Elance and took a leap of faith and a few hundred dollars to build and market his writing website. Nick describes how he started with Elance, “I completed five jobs for very, very low pay. It was hard work but I got five amazing five-star feedback comments as a result. From that point onwards I bumped up my rates and found clients easier to come by because I had great feedback.”

For anyone wondering how to get started with freelance writing, Nick recommends, “Take the plunge and sign up for a site like Elance, Guru, oDesk or PeoplePerHour. There’s no risk involved whatsoever – the only investment you need to make is your time. If you have a laptop or computer and a working internet connection, you’re 66% of the way to earning a sideline as a freelance writer. The remaining 34% of the equation is a willingness to succeed.

At night and on the weekends, Jon plays music at bars, restaurants, weddings and corporate events. He says he will even busk on occasion. He comments, “Music as a side gig is a nice complement to my cash flow as I’m bootstrapping CellBreaker. It’s David vs. Goliath by day and David on the harp by night.”

Jon also studied sustainability in school and he became enamored of using worms to compost. As a third revenue source, he sells worms. He describes his worm business, “I discovered that happy worm populations double every 90 days. My worms are always happy. So, I started selling worms and vermicompost on Craigslist and by word-of-mouth.”

Jon sums it up, “I’m an entrepreneur by day and musician by night. Plus, I sell worms. Contracts, music, and worms. Pretty unique combination, eh?”

Juli Branson works full-time creating written communication to help experts gain more exposure in their field. Usually this takes the form of assisting with speeches, books, and blog posts, but recently, Juli discovered a lucrative new niche that serves as her side gig: writing LinkedIn profiles.

Juli elaborates, “While you could say it’s part of my day job, it really is not. Experts pay me thousands of dollars to help them develop their career, and only recently have they started to realize how important LinkedIn is. They don’t have time to take a class in how to effectively write a LinkedIn profile…they would prefer to pay me $500 per profile to do it.”

Juli writes 2-3 LinkedIn profiles per month, grossing an extra $1000-$1500 per month. Juli adds that when she had a couple of friends who were temporarily unemployed and really needed cash, she taught them how to write LinkedIn profiles, too. Now when she is too busy, she sends clients to those friends and they pay her a referral fee, adding to her cash flow.