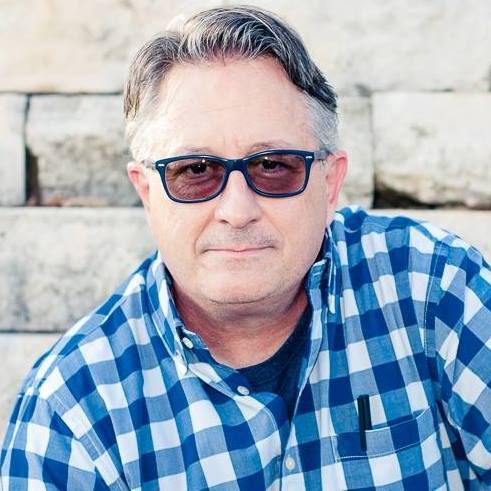 This is Part 1 of a series about day jobs for writers. Each interview in the series profiles the day job of a different writer. Today’s interview is with Lee Weaver, a writer in Austin, Texas.

Lee, to start, what is your background in journalism and writing?

I did not study journalism and I never wrote for the yearbook or anything like that. Around the time I graduated from The University of Texas in 1986 (with a BBA in Finance/International Business), I began acting out the fantasy of becoming a humor columnist a la Dave Barry, Erma Bombeck, and Lewis Grizzard. Then, just 10 short years later, the Austin Chronicle published my first column! I became a regular contributor to the Chronicle, then the Statesman, writing mostly humor columns as well as the occasional first-person feature.

In 2000, I took a job in Wichita Falls, Texas, as a business reporter for the daily paper there. Within a year, I was writing a regular personal column, along with daily reporting duties. After four years, I left there to start my own weekly community paper, which I produced for more than three years. In 2008, I launched my own consulting and professional writing enterprise. My client work included ad copy, website and social media content, strategic plans, appellate briefs, political campaign materials, full-length books, and lyrics for a taxi company jingle to the tune of Johnny Cash’s “I’ve Been Everywhere” titled “We’ll Take You Anywhere.”

My last major writing project –- and the catalyst to finally FINALLY seek the refuge of a “regular” job – was a contract gig to write an autobiographical novel for a really terrible billionaire Wall Street narcissist asshole drug addict. This project consumed a year of my life while generating income for only half of that time.

Before moving on to that part of this discussion, it’s important to note a few things:

– During the earliest years of my writing career, I worked at “regular” jobs (banker, restaurant manager) which provided income stability and affordable health insurance. During other times when I was working “day jobs” (waiting tables mostly), I was able to be included on my wife’s health insurance —again, affordably. Indeed, it was a different time. Sigh.

– From 2000 to 2008, my journalism jobs provided regular (albeit small) paychecks and benefits.

– From 2008 to (late) 2015, I did not have employer-provided insurance. Over that time, it became increasingly unaffordable to be added to my wife’s insurance and, multiple times, I went without health insurance. Because of this, I had to postpone necessary hernia surgery for more than six months in 2015 until my insurance through my current employer (eBay) kicked in.

What is your current full-time job?

I am a fraud risk analyst for eBay and, no, it’s not nearly what it sounds like. What I do is work EXTREMELY SIMILAR cases all day long in which I review messages exchanged between eBay members via the site’s messaging system. These messages have been flagged by our “sensors” for possibly containing language indicating an intent to take a transaction off the site and, thus, circumvent eBay’s fees. It is the definition of monotony, but it is the most stable predictable drama-free perfect day job imaginable.

I did not start at eBay in this role. For the first 18 months, I was a customer service agent, taking calls from customers regarding restrictions and limitations placed on their account. This was not an ideal job and I was, in fact, mortified that, at age 50, after all that I’d accomplished and sacrificed, I was working in a call center with a bunch of 20-somethings. But it ended up being the greatest work-related thing that’s ever happened to me.

Did you have a background in the type of job you have now before you landed the job?

Yes and no. I’d never worked in a call center and knew very little about eBay. But I had a lot of experience cold calling over the phone (sort of the opposite of a call center CSA) and knew a lot about running a small business, which is basically what an eBay selling account is. I’m also not easily intimidated or rattled, so the angry/abusive callers who are usually a problem for agents never really bothered me.

How did you land this job?

A Facebook friend who worked at eBay posted that they were hiring. She was sure to emphasize, via a private FB message to me, that eBay did not require a pre-employment drug screen. (Why do people always [incorrectly] assume I smoke weed all day??)

What I like most is the stability — and not just with respect to my specific job description (although I really REALLY like not giving a single thought to my job when I’m not at my job). The company’s culture, while certainly imperfect, is rooted in transparency and accountability and the belief that people are basically good. I do not fear being ambushed or set up or blindsided like I was at so many previous jobs.

I like that I can listen to music all day during my job.

I like that I am able to dictate my work schedule, down to the day/hour/minute. (Twice a year, we can request a custom schedule, which the company will accommodate to the extent that customer coverage requirements allow).

I like getting raises every year, usually twice a year. The quarterly bonuses are nice too. And, after four years, I’m making more than I’ve made at any previous job (not counting self-employment). Next year, after my five-year “work-aversary,” I’ll be eligible for a one-month paid sabbatical.

Lastly, eBay’s benefits are amazing. I often say that handing my insurance card to a doctor’s office receptionist —- and that person’s subsequent “oh my goodness!” reaction —- is the only time in this life when I feel rich.

What is challenging about this job?

Nothing. That’s the best thing about it. If I have to pick one thing, it’s managing the monotony and learning to stay focused in the absence of any minute-by-minute challenge. Truth be told, this job has helped me realize just how stressful my previous grind really was, with the downside being that I find it difficult now to gear up and get after a creative side project (That On/Off switch doesn’t so easily toggle back and forth, ya know?)

What advice do you have for writers who are considering taking a full-time job doing something other than writing?

None, really? I guess I would say to be patient. Give yourself time to assimilate the full-time job into your full-time life. That will probably take at least a year.

What is your next writing project, if you are willing to say?

After several years of kinda/sorta giving up on what I’m best at -—autobiographical essays —- I’ve recently decided to have another go at it. Everyone says readers have no appetite for anything longer than a (short) Facebook post —- and I kind of agree. But I also think that’s going to change. I think there will soon be a larger appetite for column-length (800-1000) words and I’m REALLY good at that. Besides, I’m really tired of trying (and failing) to learn how to do anything else.

Other articles in this series: