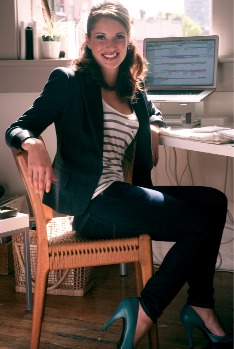 This success story is part of a series profiling people who leveraged their college internship experience into a full-time job. This interview features Victoria Whyte, a PR and social media professional.

Victoria, what college did you attend?

What year did you graduate from college?

Where did you complete an internship?

How did you find/land your internship?

The Ludus Tours internship was listed on UBC’s Business School’s Career website. Ludus Tours specializes in tour packages and hospitality at the world’s biggest cultural and sporting events. They offer travel packages to the Summer and Winter Olympic Games, World Cup and Okotobefest (to name a few).

From the second the interview started, Jessica, one of the co-founders, and I hit it off. I love to travel and I am passionate about sports, so the company was a perfect fit! After a second meeting where I met the Vancouver team, I was hired.

What type of work did you do during your internship?

I was hired on in advance of the Vancouver Winter Games, which at the time were about 8 months away. I was one of the few locals that worked for the company so I worked closely with those planning excursions, dinners and activities that highlighted Vancouver and Whistler. I was responsible for finding and signing a clothing sponsor, venue and various location management, guide staffing, and customer service – ensuring that what the customer wanted, and what they paid for, was what they received.

What was one significant thing you learned about working during your internship?

Network, network, network! Other than passion for the events, it is the relationships in the industry that has made Ludus Tours a successful business. Networking was something that was preached to us in school. I was never comfortable in those situations and often avoided them. But witnessing how essential networking and building relationships with other industry professionals was in the “real world,” I had to overcome my fear.

How did your internship lead to a job offer?

I worked with Ludus as an intern throughout the summer of 2009. In September 2009 I was registered for my last year of University and Ludus offered me a paid part-time position so I could stay with the company while I was in school. As a thank you for the summer work, they sent me to Germany to help run the 2009 Oktoberfest tour.

During the Olympics in February 2010, the UBC university was closed and I was able to work full time during the Winter Olympics. I continued my role as Event Manager and was responsible for all the hotel and tour confirmations. I was also able to attend around 15 Olympic events during that time.

Following the Olympics, I took a couple of months off to focus on and finish school. In June of 2011, I graduated and accepted a full time position as the PR Manager of Ludus Tours. I am also in charge of the social media. I have since been told that I was hired over others for the full time position because “I was the best fit.” I love the events Ludus runs and live and breathe our core values.

This summer I spent July in Spain helping to organize our Running of the Bulls Tour. I was also in Spain when they won the World Cup!

I just returned from Germany where I spent a month helping run our Okotberfest and Passion Play program.

Having a job while in school more than doubles your work load, but the experiences both positive and negative are invaluable. Whether or not you are offered a position out of an internship, the value on your resume and the real world knowledge will serve you far better than any text book you will read.

Victoria, thank you for sharing your experience and advice.